Given two strings s and t, return true if s is a subsequence of t, or false otherwise.

A subsequence of a string is a new string that is formed from the original string by deleting some (can be none) of the characters without disturbing the relative positions of the remaining characters. (i.e., “ace” is a subsequence of “abcde” while “aec” is not).

An integer array is called arithmetic if it consists of at least three elements and if the difference between any two consecutive elements is the same.

A subarray is a contiguous subsequence of the array.

You are given an integer array nums. You want to maximize the number of points you get by performing the following operation any number of times:

Return the maximum number of points you can earn by applying the above operation some number of times.

Merge the two lists in a one sorted list. The list should be made by splicing together the nodes of the first two lists.

Given head, the head of a linked list, determine if the linked list has a cycle in it.

There is a cycle in a linked list if there is some node in the list that can be reached again by continuously following the next pointer. Internally, pos is used to denote the index of the node that tail’s next pointer is connected to.

Note that pos is not passed as a parameter.

Return true if there is a cycle in the linked list. Otherwise, return false.

Given the head of a sorted linked list, delete all nodes that have duplicate numbers, leaving only distinct numbers from the original list. Return the linked list sorted as well.

You are given two non-empty linked lists representing two non-negative integers. The digits are stored in reverse order, and each of their nodes contains a single digit. Add the two numbers and return the sum as a linked list.

You may assume the two numbers do not contain any leading zero, except the number 0 itself. 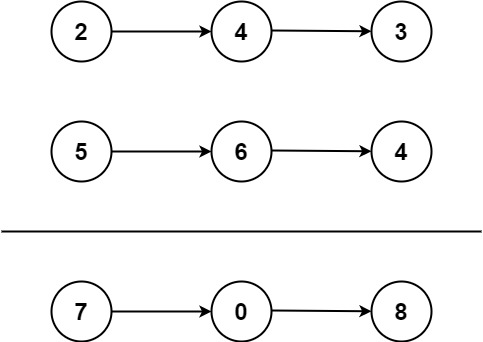 A linked list of length n is given such that each node contains an additional random pointer, which could point to any node in the list, or null.

Construct a deep copy of the list. The deep copy should consist of exactly n brand new nodes, where each new node has its value set to the value of its corresponding original node. Both the next and random pointer of the new nodes should point to new nodes in the copied list such that the pointers in the original list and copied list represent the same list state. None of the pointers in the new list should point to nodes in the original list.

val: an integer representing Node.val random_index: the index of the node (range from 0 to n-1) that the random pointer points to, or null if it does not point to any node. Your code will only be given the head of the original linked list.

Given a string path, which is an absolute path (starting with a slash ‘/’) to a file or directory in a Unix-style file system, convert it to the simplified canonical path.

The canonical path should have the following format:

Without creating a new string

Given two integer arrays pushed and popped each with distinct values, return true if this could have been the result of a sequence of push and pop operations on an initially empty stack, or false otherwise.

Given a balanced parentheses string s, return the score of the string.

The score of a balanced parentheses string is based on the following rule:

Given a string s, remove duplicate letters so that every letter appears once and only once. You must make sure your result is the smallest in lexicographical order among all possible results.

Design a stack-like data structure to push elements to the stack and pop the most frequent element from the stack.

If there is a tie for the most frequent element, the element closest to the stack’s top is removed and returned.

In a row of dominoes, tops[i] and bottoms[i] represent the top and bottom halves of the ith domino. (A domino is a tile with two numbers from 1 to 6 - one on each half of the tile.)

We may rotate the ith domino, so that tops[i] and bottoms[i] swap values.

You are given a string s. We want to partition the string into as many parts as possible so that each letter appears in at most one part.

Note that the partition is done so that after concatenating all the parts in order, the resultant string should be s.

Return a list of integers representing the size of these parts.

You are given two integers n and k. Return the lexicographically smallest string with length equal to n and numeric value equal to k.

Note that a string x is lexicographically smaller than string y if x comes before y in dictionary order, that is, either x is a prefix of y, or if i is the first position such that x[i] != y[i], then x[i] comes before y[i] in alphabetic order.

There is a broken calculator that has the integer startValue on its display initially. In one operation, you can:

You are given an array people where people[i] is the weight of the ith person, and an infinite number of boats where each boat can carry a maximum weight of limit. Each boat carries at most two people at the same time, provided the sum of the weight of those people is at most limit.

Return the minimum number of boats to carry every given person.

Return the minimum cost to fly every person to a city such that exactly n people arrive in each city.

Given an array of integers nums which is sorted in ascending order, and an integer target, write a function to search target in nums. If target exists, then return its index. Otherwise, return -1.

You must write an algorithm with O(log n) runtime complexity.

You are given an m x n binary matrix mat of 1’s (representing soldiers) and 0’s (representing civilians). The soldiers are positioned in front of the civilians. That is, all the 1’s will appear to the left of all the 0’s in each row.

A row i is weaker than a row j if one of the following is true:

Return the indices of the k weakest rows in the matrix ordered from weakest to strongest.

There is an integer array nums sorted in non-decreasing order (not necessarily with distinct values).

Given the array nums after the rotation and an integer target, return true if target is in nums, or false if it is not in nums.

You must decrease the overall operation steps as much as possible.

Given an array of integers nums containing n + 1 integers where each integer is in the range [1, n] inclusive.

You must solve the problem without modifying the array nums and uses only constant extra space.

Write an efficient algorithm that searches for a value target in an m x n integer matrix matrix. This matrix has the following properties:

Given an array nums which consists of non-negative integers and an integer m, you can split the array into m non-empty continuous subarrays.

Write an algorithm to minimize the largest sum among these m subarrays.

Day 1 | Binary Search 704. Binary Search Given an array of integers nums which is sorted in ascending order, and an integer target, write a function to search target in nums. If target exists, th...

Day 1 | Array 217. Contains Duplicate Given an integer array nums, return true if any value appears at least twice in the array, and return false if every element is distinct. Practice clas...

Day 1 | Binary Search 34. Find First and Last Position of Element in Sorted Array Given an array of integers nums sorted in non-decreasing order, find the starting and ending position of a given ...